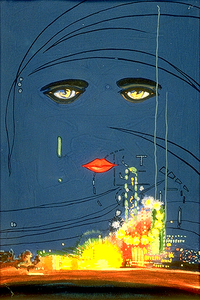 I re-read The Great Gatsby for like the 17th time recently. Completely by accident, as it usually happens. I’ll pick it up to read a passage or two, thumb my way to the front, and BOOM! I’m taken in again. I know it’s cliché, but really every time I read it I see something new. One of the new things I found this time was a mistake.

Yes, a mistake. In The Great Gatsby. But before you stone me for blasphemy, let me plead my case.

Part way into the book, Nick Carraway, the narrator, lists a bunch of people who came to Gatsby’s parties as a way to give the reader a sense of the kind of parties these were — and it’s a whole new level of name-dropping. The first sentence of the fourth paragraph of the fourth chapter goes like this:

From East Egg, then, came the Chester Beckers and the Leeches, and a man named Bunsen, whom I knew at Yale, and Doctor Webster Civet, who was drowned last summer up in Maine. (Emphasis mine, surprise surprise.)

Why is this a mistake? Well, you Gatsby scholars will remember that Nick wrote his story after he moved back to St. Paul, Minnesota. Which, as you geography majors/enthusiasts will realize, is not “down” from Maine so much as it is “across” or “over”.

However, Maine is up from New York, where the story takes place, and where Fitzgerald started writing the book. So either he forgot the premise of Nick being in St. Paul, not New York, when he was writing this, or he forgot himself and referred to Maine in relation to his own desk at the moment he put those words to paper.

Now before you jump all over me for nitpicking (you’d be right most of the time, btw), I’m not pointing this out to say, “Ha! I have proof that there is no such thing as the perfect novel after all!” I point it out because it reveals the Man Behind the Curtain, and that excites me. You can learn so much more about the writer in his or her mistakes than through their perfect prose — you feel so much closer to the writer and the process. At least I do.

There is actually an extra little twist to this. I mentioned above that Fitzgerald starting writing Gatsby in New York — but it wasn’t finished there. Fitzgerald and his family moved to the French Riviera in 1924 so he could finalize it, and according to a letter to his editor, he scrapped most of the book and started fresh. Which implies of course that he didn’t scrap all of it — and this little descriptive tidbit that has little to do with the characters is exactly the type of passage that could survive to later drafts.

So, what this little slip, “up in Maine”, tells me is that (a) Fitzgerald absent-mindedly forgot where the narrator, Nick Carraway, was at the time he “wrote” his account, proving that (b) this passage was written in New York, and (c) this was part of the original manuscript that survived the trip to France.

I know. I could be wrong. Maybe in the US in the 1920s everyone thought of Maine as “up there” — it is the northern-most state in the continental US (weird that phrase, since Alaska is still part of the continent… but I digress). Maybe Nick, in his “writing” of his account, forgot himself and wrote it from the perspective of remembering back to his New York days (can you say Inception, anyone?)

There are countless explanations, and this is all conjecture on my part. I even Googled it to see if anyone else has talked about this “mistake” before, and after 15-0dd pages of search results, I couldn’t find the faintest reference to it (if you know of one, please let me know).

So yes, I could be completely off my rocker, another year older and all that. But I don’t think so. Besides, I like looking at the Man Behind the Curtain. So this is my story, and I’m sticking to it.

What do you think? Feel free to let me know below…

This entry was posted in OTF and tagged F. Scott Fitzgerald, French Riviera, New York, The Great Gatsby, Up in Maine. Bookmark the permalink.